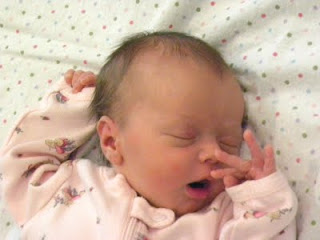 Well, by now most everyone already knows I had my daughter. Lisbon Makayla Nunes was born on Tuesday August 30 at 2:41 PM. She weighed 6 lbs and 13 oz and was 18 1/2 inches long. Her parents, five of her six siblings, her maternal grandmother, and her Aunt Mary were all there to welcome her into the world. She was greatly anticipated and celebrated by all, but especially by me, her mother, as it was a long and difficult pregnancy.

I actually began labor in the early morning the Thursday before with pain as real as any I’d ever experienced with my six other children. I told the children Lisbon was coming that day, and one of my daughters didn’t go into work. We were all excited. Then things stalled, and I slowed to two contractions an hour, some of which were painful and some of which were not. I was only dilated to a two. I chalked it up to false or pre-labor, though I’d never experienced painful false labor before.

The entire weekend proceeded without change. By Sunday I was only three dilated, and I was frustrated. After all the ONLY reason I was going to the hospital to have Lisbon was so I could have an epidural and Pitocin, and what was the point if I was going to have to experience so many painful contractions before I even got there? But school was beginning for my two youngest children on Monday, so I didn’t push the issue. I did worry about poor Lisbon getting squished for so long. If she didn’t move for a bit, I would drink juice and wake her up. I was terrified that horrible would happen to her, and after all that I’d been through, that almost pushed me over the edge.

The contractions continued all Monday, two or three an hour. We had scheduled Tuesday for induction, so that was my light at the end of the tunnel. Early Tuesday morning the contractions had increased to five or six in an hour. Most were so painful I had to breathe through them. When the hospital called to tell me to come in, I was more than ready. I hurried through last-minute arrangements for my other children.

At seven-thirty we arrived at the hospital. I was dilated to a four and was 70% effaced. Definitely in labor, but again the contractions had slowed to two every hour. I was convinced that my age was working against me and that my uterus was simply too tired to finish the job. The midwife suggested doing the labor without Pitocin but even when I was younger I would have taken another 24 hours to give birth, and I was already exhausted.

It took until nine to get the epidural and pitocin going. The contractions were still stalled though. A check three hours later at noon showed I wasn’t even dilated to a five! I was 80% effaced, but that gave me little comfort. My mother arrived, and so did three of my older children. My sister showed up a bit later with the two youngest, whom she’d checked out of school. The waiting began in earnest. One of my daughters had to work later, and she was afraid she’d miss the birth. She was already missing a college class to be there.

At two I was still a five, but 90% effaced. The midwife was confused at the slowness and asked the nurse about the level of the Pitocin. They upped it a bit. After about fifteen minutes, I could actually feel the contractions (which still hurt less than the false labor I’d been having so I didn’t feel the need to boost the epidural). I’d felt all along that I was too numb because if you can’t feel anything, how can you tell when you feel ready to push?

Twenty more minutes passed. Finally I was having regular contractions. I continued to pay close attention to my daughter’s heartbeat, making sure she was all right. Then with one contraction, the heartbeat disappeared. I found it seconds later by moving the little monitor on my stomach lower. It happened twice more and, worried, we sent my sister for the midwife. She came back in and reassured us that everything was all right. My mother, a lay midwife, recommended that she check me because something had obviously changed. I agreed.

Minutes later the midwife’s face showed surprise. I was fully dilated and ready to go! She hurried out to get the nurse. She also called the nursery for the breathing specialists because she had decided the amniotic fluid was a little dark. I was so upset at this because if they are called to a birth, they get the baby first instead of the mom. Grrr. I KNEW my baby was fine and I wanted her first. And I’d fight them for her! They were not going to stick an unnecessary tube down her nose.

The midwife and nurse hurried in, and I told them them the baby was coming NOW. “Can’t you wait a minute?” the midwife asked. Uh, no. I absolutely couldn’t. I wasn’t pushing, it was the Pitocin, which, they should have turned off by that point if they wanted to slow things down. I could feel that my daughter was already coming out.

Sure enough, my husband pulled back the sheet and there was a bit of our daughter’s head. The nurse shoved on her gloves and hurried over to help the baby out while the midwife dived for her gloves. In the next minute, my baby was on my stomach, but the cord was short so I couldn’t bring her up to my chest. She was screaming. I calmed her, but the nurse said to let her cry a bit in case anything was in her lungs. I talked to my daughter and told her everything was fine, that she was fine.

My husband cut the cord and finally I could hold my daughter. She had calmed and her color looked great. The nurse rubbed her down with warm receiving blankets while I cuddled her. The breathing specialist showed up but left almost immediately when the learned the baby was already there and (of course) breathing perfectly on her own. Minutes later, Lisbon was nursing vigorously, content but alert.

I worried a little that in the end it had all happened too fast—going from five dilated to giving birth in 41 minutes, but Lisbon seemed fine. She had all her parts, was alert, her vitals were perfect, and as the doctor from Fetal Maternal Medicine predicted, you couldn’t tell by looking at Lisbon’s back that she has a hemivertebra. While that’s definitely something we will have to check into later, it’s is NOT something requiring immediate attention or something that will delay her physical progress. No sign, either, of any of the 100 syndromes that are usually attached to an extra half vertebra, something the FMM doctor worried our daughter might have even though she could pick up no signs of one on the many ultrasounds. If I’d never had an ultrasound, as I didn’t with my first four natural births, I would never have known about the hemivertibra until it caused Lisbon pain in later life, if it ever caused pain.

The minute Lisbon was out, I began wondering how fast I could get out of the hospital. I wanted my own bed and to be left alone with my precious baby. I’d already told everyone I wanted to leave ASAP, and my midwife had set the wheels in motion. We had to wait for my regular family doctor to come and do a baby check (rolling my eyes—he was in the room two minutes) before we could go home. At 7:09 PM we were driving away from the hospital. My right leg was still a little numb from the epidural, and I wouldn’t be able to walk around with the baby in my arms for a bit, but I knew that would pass.

We stopped off for my favorite strawberry-Oreo shake on the way home. It was really good, and I felt great. Of course I was under the influence of over-the-counter Ibruprofen, but still I felt MUCH better than I’d felt in most of the past eight months.

Two days later, we had a rather terrifying fever scare with Lisbon, which had me back to wondering if I’d endured these past eight horrible months only to lose her to some unnamed syndrome or complication after all. But an internal temperature check showed she was within a proper range. I nixed my plans to go to church that Sunday. Lisbon needs to be a little older before she is around a crowd and even then people outside the family aren’t supposed to hold her until she’s a month old.

I’d stopped taking the Ibruprofen after a few days, but when my milk came in, I had to take it again because the afterbirth contractions picked up again. I’d also developed a bit of a sore throat and a hoarse voice. With this and the huge cysts of milk that have formed in my breasts and under my arms, it looks like I’d better keep taking it for a while. As long as I remind myself to take it easy, I might as well FEEL halfway good. I also have to be very careful of mastitis, since I’m prone to the infection. I’ll know in a few days if I’ve been successful enough to avoid antibiotics, which is my goal. That and making sure Lisbon doesn’t get my cold. So far so good. Lisbon is much more content now that she has plenty of milk. She nursed for about eighteen hours out of every twenty-four the first few days—apparently that’s what it took for her to feel satisfied with only the colostrum. Now she’s content between nursings for two to three hours. She even lets her siblings hold her a minute or two without crying for me. 🙂 I actually slept last night between and through nursing, an old skill I’m picking back up quickly.

It’s over—the long months of waiting and the complications and pains of pregnancy at forty-five. It was ALL worth it. I have my precious reward, and I am enjoying every second of being with her. I can sit and stare at her for hours. In fact, that’s pretty much all any of us do around her (you should see how her father dotes on her already). She is a miracle. My miracle. And I’m so grateful to enter this new phase with her.