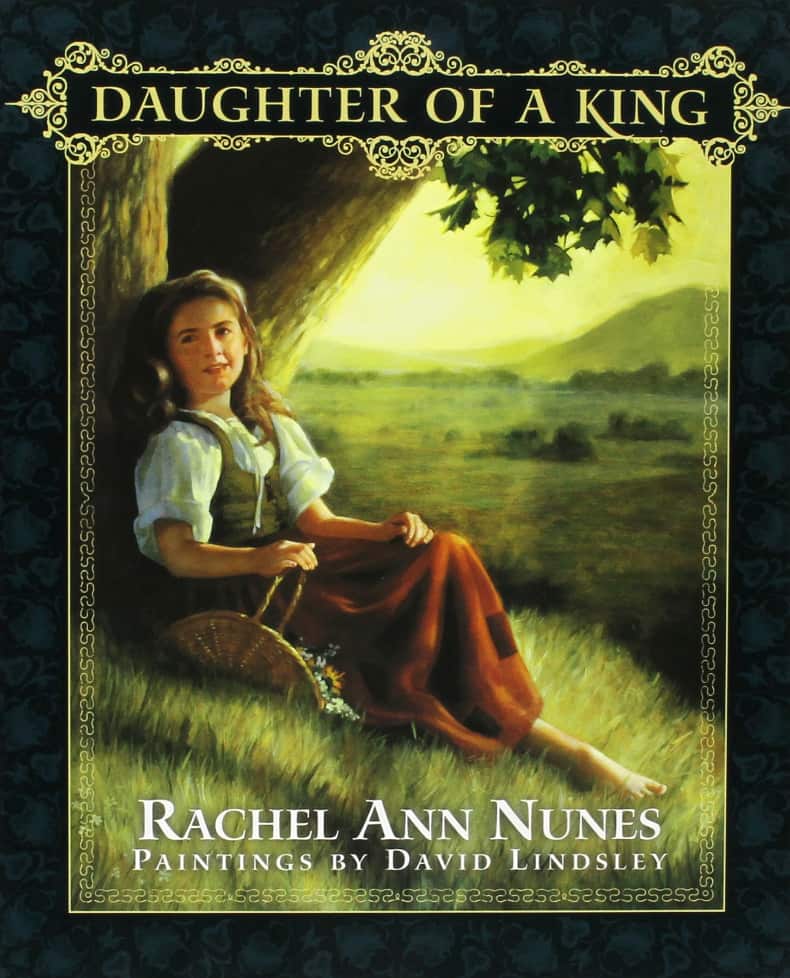 I’m often asked how I came up with the idea for my picture book Daughter of a King. I usually laugh and tell them it was a three-year journey—and it was. At least to finally get the book published.

The decision to write a picture book first came to me in January of 1999. I was newly expecting my fifth child and was very sick. My editor had mentioned that they were interested in publishing picture books and the wheels in my head began to spin. I might be so sick that I practically had to crawl to the computer, but writing a picture book had to be easier than a whole novel, didn’t it?

As I finished up the novel I was working on, I waited for an idea for a picture book. I was confident something would make itself known, since I always had more than enough ideas for novels floating around in my head. But nothing came. Of course, I prayed for inspiration, and I also went to the library and began to research picture books. Still no idea appeared. This was harder than I’d thought!

Well, a writer can never stop writing just because of a simple problem like the lack of an idea, so after finishing my novel, I crawled to the computer one morning in February, determined to begin my picture book. While I waited for the computer to boot up, I prayed. Then I thought about my purpose in writing the story. What was the most important thing I could tell the child I was carrying? If something were to happen to me and I couldn’t be around to raise the baby, what would be the one thing I could leave behind in the book that would help him or her stay close to the Lord?

Suddenly, I knew what to write. If I could help my baby and my other children understand that they were children of a loving Heavenly Father—if they truly internalized that fact—everything else would fall into place. They would obey the commandments, they would follow the Savior.

Of course, my children didn’t always look or act like children of a Heavenly Father. Sometimes they made mistakes. I began to type. The idea formed quickly, as though all the inspiration I had lacked suddenly came rushing in all at once. Soon I had the whole story of a little girl who was princess, though she didn’t always look or act like one. Yet she always knew where she had come from and where she was headed because she had been taught that she was the daughter of the King. From there I rewrote, trimmed, edited, passed the manuscript around to friends, and then rewrote some more. After a week I turned in the story.

I heard nothing from my publisher for seven months so I finally wrote them a letter. They politely declined to publish the book. Since I was going to have a baby the next month, I let the story sit. Five or six months passed before I looked at it again, and that’s when I decided to find another publisher. I believed in the story and its message and was determined to get it out to the market.

Meanwhile, I’d had a book/print signing with David Lindsley, a very talented portrait artist and at the time we’d discussed the possibility of collaborating on a project. I called him up in February 2000, a year after I’d first written the book, and he agreed to read the story. I e-mailed it to him and he was very touched by the message. We decided to work together.

The paintings were slow in coming. Models and costumes had to be found, time had to be carved out of a busy schedule. But finally David began. In August of 2000, he had one painting completely finished and several others nearly so. I began to query publishers and agents in the national market. Many sent back “good” rejections letters, which proved to me that we had an idea that would sell if we could just find the right publisher. But we were unable to find a good match.

Finally, at the end November, we decided to once again approach my LDS publisher, who had meanwhile changed managing editors. It was the week of Thanksgiving. We went in on a Tuesday morning to present the story with the four paintings David had completed and also several of the ones he still had in progress. The next day the editor called and told me they definitely wanted to publish the book. I think that was the quickest reply I’ve ever had from any publisher!

More months went by as David worked on the paintings. At times he had to stop to work on other deadlines, and I wondered if the book would ever be finished. Another talented artist, Ben Sowards, was hired to complete the vignettes (smaller pictures on the text pages) so that the deadline could be met. As the time came closer to publication, an editor and I went through the manuscript again. Finally, the book went to press at the beginning of June 2001, with a release date of October 2001. (Picture books are often printed in Hong Kong and usually take about four months.)

October came and went, but no books arrived. Then I heard that the boat my books were on had hit into another boat in the Japanese Sea, sinking it (the other boat sank, not the one with my books). The boat was forced to stay in Japan while authorities reviewed the evidence, and my books sat waiting on a Japanese dock. It was as though the adversary didn’t want Daughter to reach the LDS market at all. This delay was disheartening after working past so many obstacles in trying to get the book published.

Another boat came from Hong Kong, picked up the first ship’s cargo—including my books—returned to Hong Kong for additional cargo, and then at last set out for the United States. After passing customs in California, Daughter of a King was finally on its way to Utah. All sorts of jokes were flying around about the book—how they and another LDS book had been the only items salvaged after a boating accident. That they’d been found in a sealed crate bobbing in the water. In reality, the books had never been lost, only delayed.

Two months short of three years since I decided to write the book, Daughter of a King went into the LDS market—with a big bang. In three weeks they sold out of the first printing and the publisher ordered more from nearby Canada (more expensive but faster than Hong Kong). Two weeks later those books were being shipped to stores. By the end of December 2001, a third printing had been ordered from Hong Kong.

Daughter of a King has gone into multiple printings, a smaller board book version with an abbreviated text was released in September of 2002, and a DVD version in 2005. Members from all over have written to tell me how they’ve used the story in their families, Primary, Young Women groups, and in Relief Societies. I feel this book was inspired and pray that it will continue to touch lives all over the world. I am grateful to have been a part of its creation.

Reuse notice: you are free to print for personal use or non-commercial use with friends or in lessons, share this post link anywhere, quote a short excerpt with attribution and a link to this site, but you may not use this post in its entirety on your own page. Thank you for caring about copyright.