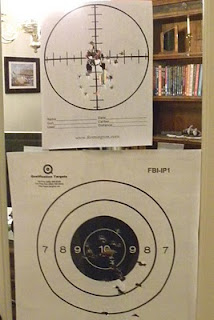 Last night my husband and I took our seventeen-year-old daughter to a local indoor shooting range. Since we’re relatively new to the whole handgun thing, this was her first chance to shoot one. In fact, the real reason I’ve gotten into guns recently is because a few of my characters use them, but I didn’t have much experience except for a few range trips as a teen with my parents and once with my own rifle after I was married. It was time to learn.

So after a conceal carry class and several range trips, I made the plunge and chose two weapons my main characters would use, and experimented with others I could have minor characters use. Or bad guys. Heh, heh. Can’t forget those delicious bad guys.

And I found out something–this is fun stuff! Though I’ve always believe in the right to bear arms, I felt some uncertainty about what was involved and whether I should own handguns with children in the home. But now that I’m trained, the scare factor is gone, and the respect factor is, if anything, greater. Since we do have children in the house, the guns must be securely locked away, in use, or in a holster that someone responsible is wearing. There is no other option. Not in the desk, on the counter, or in a purse. That’s far too dangerous. I’ve learned that teaching children about guns and to respect them, and taking them shooting is also vital to safely owning any kind of gun.
Last night with my daughter and husband, I was shooting my new Ruger LCP, and we also had our Smith & Wesson M&P 9C, which by the way is an incredible gun. Apparently, I have a knack for shooting, and with the M&P, I can shoot ANYTHING I want without reall 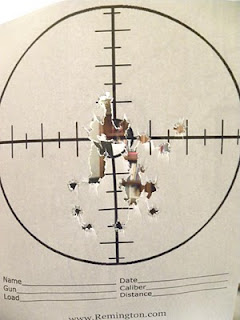 y taking long to aim. Pull, boom, boom, boom. See the picture (top of the two targets above) for how I did on my first try with this gun. After shredding the middle (see close of picture on right), I finally had to aim somewhere else on the target! The M&P is a fabulous compact 9mm, though for me or my female character it could be a bit conspicuous for conceal carry, depending on what clothes we were wearing. (I know you think I have all control of my characters and could tell them what to wear and exactly how to act, but any writer will tell you that’s simply not true.)
My Ruger LCP .380 is signifcantly more difficult to both rack and to pull the trigger. Even so, I can decimate a target with it as well. The lower picture of the two above (see below for close up) is how I did the first time I used the Ruger. The main advantage of the Ruger is that it’s easily carried concealed. Yes, the .380 has less stopping power than a 9mm, but even my character 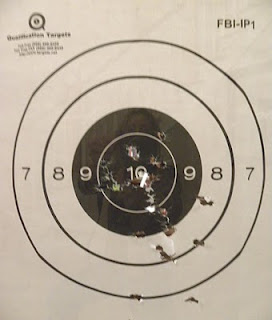 knows that a .380 on her body will do a lot more for her in an emergency situation than a larger gun sitting in her safe at home. Especially, if she is using hollow point ammo.
I’d actually been planning to buy the Sig P238, which is about the same size, but the single action movement (instead of the double), makes the trigger almost too easy to pull and so the gun has a safety. Having learned the danger of relying on a safety in my conceal carry class, I really didn’t want a semi-automatic pistol with a crutch that could easily be forgotten when carrying, or left on in an emergency situation. Ultimately, the 12 pounds trigger didn’t prevent me from buying the Ruger. Turned out to be a good choice as I have no problem shooting it.
After a few practice rounds, my daughter also did well with the M&P and came away loving the gun as much I do. She didn’t like my Ruger, however; she could barely pull the trigger and couldn’t hit anything. Even my husband couldn’t hit much with it. I couldn’t explain my success with either gun, or the others I’ve tried (maybe something left over my my old pitching days), but it was a lot of fun.
As we taught Catia how to shoot, showing her all the tricks we’ve learned and watching her carefully to be sure there was no accident, it was a testament to how far we’ve come ourselves this past year–and how much fun a new hobby can be (if expensive.)
This isn’t the first time my characters have enriched my life. Over the years I’ve learned many, many tidbits about hundreds of different subjects, but so far this has been the most tangible extension of my writing. My next personal goal is to take martial arts lessons, because though my son was involved in it for years, there is nothing like writing from personal experience.
In a week or so, we’ll take our fourteen-year-old to the range. He won’t likely be shooting the Ruger more than once or twice–he probably won’t like it–but he’ll love the M&P. Then we’ll go on to the next child, and so forth. It’ll be a family affair, something we can all safely enjoy together.